South-East Queensland is at the forefront of an active HEMA movement Australia-wide, with strong relationships also with major international HEMA figures. This enables us to participate in local, interstate and international workshops and competitions, such as:

As details of these events are released each year links to many of them can be found on the Australian Historical Fencing League circuit listing.

SEQ fencers have competed in the Swedish annual event called Swordfish, held since 2006. This is one of the biggest HEMA tournaments in the world and is generally considered to be the “world cup of HEMA”. 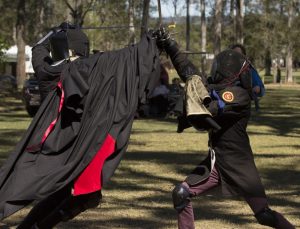